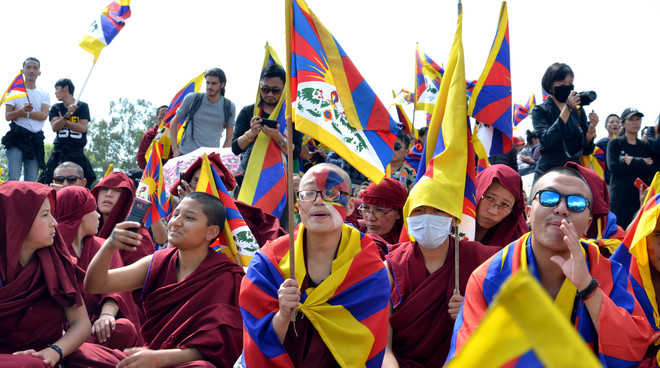 Tibetan Uprising Day, observed on March 10, commemorates the 1959 Tibetan peaceful uprising against Communist China’s repression in the Tibetan capital of Lhasa. The failure of the armed rebellion ultimately resulted in a violent crackdown on Tibetan independence movements, and the flight of His Holiness the 14th Dalai Lama into exile.

While not a traditional Tibetan Buddhist holiday, March 10th is a very important date in the Tibetan calendar. This year marks the 62nd anniversary of the Tibetan National Uprising. Around the world, Tibetans and their supporters remember and pay tribute to all those who have sacrificed their lives for Tibet’s struggle. An estimated one million Tibetans have perished and 98% of monasteries and nunneries were destroyed under the Communist Chinese invasion.

Lhasa’s three major monasteries—Sera-Jey, Ganden, and Drepung—were seriously damaged by shelling, with Sera and Drepung being damaged nearly beyond repair. According to the TGIE, Members of the Dalai Lama’s bodyguard remaining in Lhasa were disarmed and publicly executed, along with Tibetans found to be harboring weapons in their homes. Thousands of Tibetan monks were executed or arrested, and monasteries and temples around the city were looted or destroyed.

Our dearest teacher Geshe-la and his family were amongst eighty thousand Tibetan refugees who fled over the frozen Himalayas into neighboring India. Sadly, Geshe-la’s family was one of thousands captured by the Chinese army and thrown into concentration camps. His family was held hostage for two long years until their narrow escape to India in 1961. At the young age of 17, Venerable Phelgye was one of the first monastics to help rebuild Sera-Jey monastery in Mysore, India.

On March 12, 1959 thousands of women gathered peacefully outside of the Potala Palace in Lhasa. Now known as Women’s Uprising Day many of the women involved were imprisoned, including the leader of the nonviolent demonstration, Pamo Kusang. Some of the women were tortured, died in prison, or were executed such as Gurteng Kunsang, mother of six.

Please join our sangha in solidarity and prayer for all Tibetans whose fight for autonomy remains to this day.